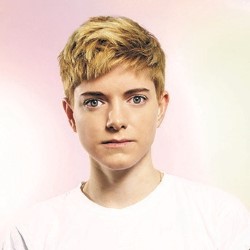 Mae Martin has a very unique style, it’s not in your face comedy and sometimes it’s more thought provoking than funny, but a really enjoyable time is to be had in her company. The night I saw her the City Café venue was absolutely packed with standing room only for the last few punters to squeeze in (and that was on a school night). The audience was predominantly under 30 but there were a few slightly more mature people there and the show is really for everyone.

Mae was brought up in Canada by her bohemian parents Wendy and James who furnished her with a lovely open and accepting outlook on life, sexuality and made her the free spirit and extremely funny woman she is today. In her show she talks of her childhood, her Christmas wish list, her brother, who is very straight laced although she does have one anecdote she likes to tell his friends. Her mother’s friends who she refers to as the goddess club with a particularly funny recurring drunken tale from one of the women. She has recently come out a ‘relashe’ with a woman and is open to entering into another ‘relashe’ and explains humorously and with great analogies why this could be with a male or female, it’s the person you fall in love with. Mae also tells of times where although most people are open minded she has been subjected to stereotypical prejudice, if only Wendy and James could have raised or educated more people we would have a more tolerant and inclusive society just like the Edinburgh Fringe crowd.

With only a few nights left get there early as Mae Martin is definitely someone worth seeing. This is a free show with bucket at the end so give generously, she’s well worth it.