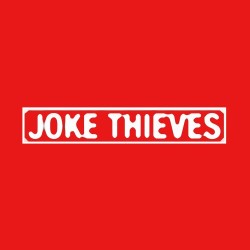 The idea behind Joke Thieves has so much potential. Comics, who normally hate their material being used by someone else – perform a small part of their routine, which their partner then does in their own way, keeping in mind that the favour will be returned.

Host Will Mars gets an audience member to pairs up the comics, so that we know they can’t have prepared in advance. Andrew Ryan and Steve Bugeja take on each others’ work, while Dana Alexander and Pearse James do similar. Mars warns us that sometimes comics go for their trickiest sets, so naturally the female comic covered being a girl, while her partner discussed his penis. Bugeja was probably funniest, with a list of facts about himself.

Next up, the thievery. Ryan borrowed Bugeja’s list book, and occasionally used it, while mostly insulting his opposite number. Bugeja took a similar approach, also just hinting at the material between character assassination attempts.

Only Alexander really took the material and made it her own – using sets ups and lines intact before adding her own twist. James also stuck closely to the source, but more as an impression.

Then that was it. No chance to vote, analyse, or decide who did what better, it just stopped. A pity, as the potential here is huge, and there were some laughs –but the promise really wasn’t fulfilled.

Reviewed on 22 Aug by Gill