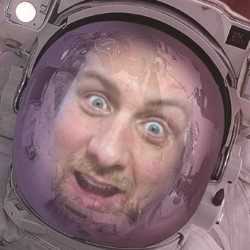 There is something that is comforting about going to see a Mitch Benn show. There are a certain amount of givens. The show will be funny and extremely well written, there will be some clever and inventive self-penned songs that have been his trademark over the years and that you are in the hands of a consummate professional.

Benn has been around for a while, it must have been about 20 years ago I first saw him but his longevity is testament to the man. Benn is an artist who feels passionate about stuff and his subject matter this year centres on Science Fiction movies of years ago and how their future is now the past. Where are the inventions? What no flying cars?

He has a lot to say and his machine gun delivery rattles his way through the afore mentioned films, robots, iPads, iWatches, YouTube videos, Global Warming, reprising one of his songs of years ago and Christopher Lee. He also manages to do live looping using his skills to build a number with his smart phone app.

All in all a very pleasant hour in the presence of a quality performer.