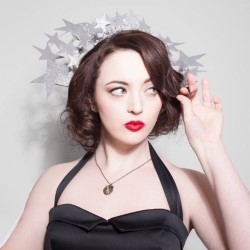 Fern Brady is a London based Scottish comedian who is definitely making a name for herself and returns to the Fringe with year with her latest show Male Comedienne.
Self-deprecation is the name of her game be it her wide apart eyes, her big hands or her somewhat unsupportive parent or missing out on a female comedians brunch. She has also been mistaken for a man and even had her photo in a national newspaper mistakenly for her boyfriend.
Ms Brady has oodles of stage presence, a wicked dry sense of humour and a well-crafted funny hour of material. She incites both laughter and empathy from the sell-out crowd who were present at the gig I saw and it was obvious they were lapping up all she had to relate.
Topics she regaled them with included her religion, lapsed catholic guilt, a lack of female friends, some early romantic experiences pen pals and previous jobs, together with a short foray into Brexit issues.
There is no doubt in my mind that she is destined for a long comedy career and maybe she will also get an in invite to that brunch.
****
Reviewed by Geoff
Stand 2
12.10 to 13.10
Until 28th (not 15th)

Burnistoun Live at the Fringe 4****