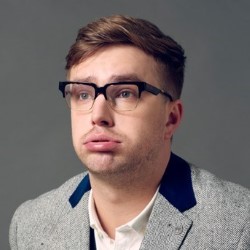 Iain Stirling makes a triumphant return to the Fringe fresh from his new found fame as the voice of the ridiculously popular Love Island. Who knew, and Iain certainly didn’t, the impact and near nationwide obsession that Love Island would become!

After we are treated to a voice over (in the style of!) introduction from the man himself, Iain bounds onstage and immediately announces to the packed audience that, for those of you who had absolutely no idea, “This is what I look like!”.

After bemoaning the Edinburgh weather, having spent weeks in Spain, we are quickly reminded that this is a local boy! Much local humour follows, without alienating the non-locals in the room. On his return to Edinburgh and after eight years in London. Iain is struck by the gentrification of Leith. The middle classes are inhabiting certain parts of Leith once better known as the stomping ground of junkies and prostitutes! How did that happen!

We are quickly transported to Iain’s other worlds of being interviewed on live television by Piers Morgan and having to attend grown up dinner parties for thirty something’s who have moved out of London to settle down, get a mortgage and die!

Iain’s nervous energy is infectious and he is a natural performer who commands your attention. His years of being a children’s TV presenter has paid dividends for a grown up career and ironically, as he has one of the most recognisable voices, he has a face for television! 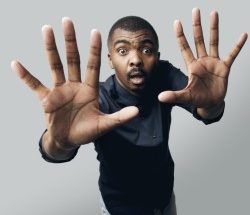 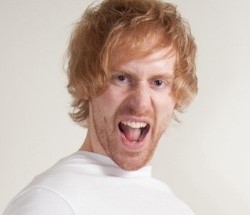