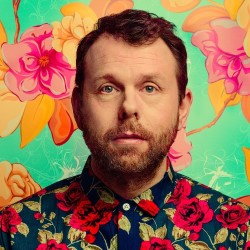 Michael Legge is a very angry man, a vegan, a functioning alcoholic and 48 years old. But he is the driver of the whimsy bus and we are all on it, so buckle in and let the journey is beginning.
He is not impressed by much, hates ‘I don’t anymore people’ gluten intolerances, Twitter idiots, his drinking companion Simon Winger who loves Texas and Ed Sheerin, boy does he hate Ed Sheerin.
But it is well crafted anger, Legge gets genuine laughs throughout, the show is well written and performed in his own inimitable style, occasionally in your face, sometimes literally
But there is whimsy, some excellent call-backs and observational gems along the way together with a story or two, especially one with a butterfly that had the healthy number of attendees roaring with laughter.
But his true anger is directed at the Apple Store and it’s employees. You can nearly seen the steam coming out of his ears.
If there was a question about the show, for me was the finale about his late lamented dog Jerk. Although this was touching and well done it did feel a little ‘bolted on’.
****
Reviewed by Geoff
Stand 2
13.20 to 14.20
Until 27th (not 14th)