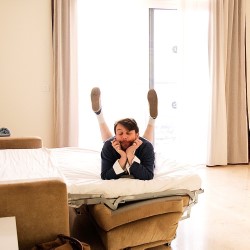 That Thom Tuck is an experienced and perceptive performer is evident throughout this show. He’s unperturbed by silence, the pace and tone of delivery is measured and well-honed, and the whole lot is underlined by a wide array of caricatured facial expressions.

Thom has put a lot into this show, and that isn’t necessarily a comment on what he ends up wearing, though that too is rather horrifically delightful (not least because of the shit-eating grin with which he accessorises it). It’s the extremes and the contrasts which make this show enjoyable: from witty and erudite discourse to having inexperienced audience members make up his face.

If this show does have a theme, it might be ‘doing stuff because it’s funny is a good enough reason to do it’. The topics range from tattoos to Islam to uber drivers, and while there’s no narrative as such, it all gels together pretty well. ‘Because it’s funny’ is a philosophy that seems to work for Mr Tuck, who apparently enjoyed the show as much as the audience did.