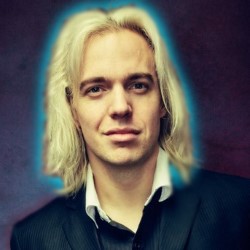 Mr Robertson, he informed us early on, doesn’t have much of a plan for the show, except for the ending, which needs some participants. So it would probably be accurate (if not the whole story) to say he spent the first fifty-five minutes of the show feeling out consenting playmates from amongst the audience. And it was highly entertaining.

John Robertson on stage seems like a really lovely bloke, and as you might expect from the show title, he is in complete control of a show which does have serious potential to descend into utter anarchy. The show is in about equal parts John’s amusingly candid stories about his life and experiences, and John roundly and thoroughly verbally abusing the audience (though that does change at the end, and maybe not in the way you’d expect).

The ending is not one you’re likely to see elsewhere (though this is the Fringe), and is not for the faint-hearted. I was uncomfortable both because some people seemed to be enjoying it – and it’s not usual for that to be on such public display in my daily life – and because at least one person looked like they weren’t, but were enduring it anyway. Who knew comedy needed a safe word?