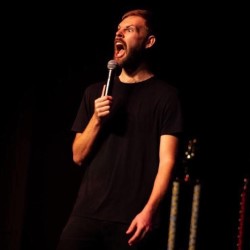 Mr Frank is a newcomer to the Fringe, but not to comedy, having performed in America for some time. His experience is evident in his confidence and easy facility with his material, and in his effusive, enthusiastic energy on stage. He bounds up, delivers a one sentence précis of the show, and bam, we were off – no time-wasting with welcomes or crowd work, just straight into cerebral, logical, well constructed stand up.

This show contains my favourite dick joke I’ve ever heard at the Fringe. It’s clever and it’s silly, and it examines the world from an unexpected perspective; statements which could describe the whole show. Mr Frank takes a pragmatic, logical, sensible look at a variety of topics – religion, gun ownership, aliens, politics, climate change – and examines the incongruities thus revealed. He’s very careful not to mock, simply to question. Nevertheless, for those looking to be offended, there is sufficient here to misconstrue.

A varied response from the audience I was with, but there was consistent and audible laughter throughout the show. The quality of his material and performance is consistent, and things move at a pace which suggests you’re expected to be relatively well-informed and have some smarts (no dumbing down here).

Lovely first Fringe, and hopefully not his last.