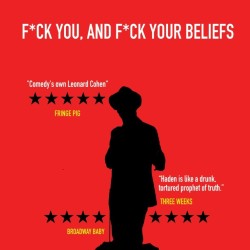 Mr Haden’s show is that of an angry young man who’s lost his hope that things could change or be better. His observations – on climate change, politics (left and right), the current cabinet, and a whole range of other topics – are clear, concise, strongly-presented and well argued (though they may lack nuance or subtleties, for comedic purposes), but, in the show I attended at least, they were not often able to move the audience to laughter, only occasionally to a wry smile.

Mr Haden does have an excellent command of metaphors and similes, and employed these to bring clarity and light to various topics, and some might even, in another set, have drawn forth laughter, but in the midst of almost unrelenting vitriol and apparent despair, these elements weren’t bright enough. The ending, in its delivery and construction, is something closer to performance poetry, and this slightly (though the content remains sombre) lifted the tone of the show.

The biggest laugh of the show came from an anecdote about poo, and perhaps that tells you something about the truths Mr Haden wished to bring: they are perhaps too real and too imminent for laughter.

Ben Target: Six Endings in Search of a Beginning 4.5***