Ben Target: Six Endings in Search of a Beginning 4.5*** - One4Review 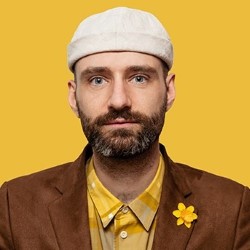 Ben says during the show that this is both a work in progress, and that the work that is in progress will become a play; there is indeed something of the theatre about this work, which is meditative, quietly lyrical and restorative. It is also, as is often the case with experienced performers who know their craft, more ‘complete’ than many ‘finished’ shows.

Almost every reviewer or critic will use ‘gentle’ about Mr Target – he uses it himself on his flyer – and this is because it’s the thing that stays with you most. His delivery is measured and melodic, his reflections calm and considered, but no less passionate for that. There’s a narrative, a story in this show, but the details – the characters and timelines – are obscured by plot. It doesn’t particularly matter, because the show is like spending time looking at an work of art or listening to a symphony: some things will resonate, some things will evoke a response, and it’s less important that you understand every detail and have them pinned dead to a board, than that there is a connection with some element of it, and you’re able to take what you can or what you need from it.

There are some laughs in this show, and these are the bits Mr Target has designed to be funny: there is no part intended to be funny which does not land square on target. At the top of the show, Mr Target acknowledges every audience member in turn with a smile and a nod, and from one point to the next, you’ve slid into the show, calm, drifting, beautiful.