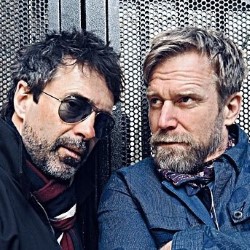 There are badges during this show. They bear the latin motto ‘adolescens habet scientiam’, which as far as I can work out means ‘young people don’t know shit’. Mr Law, in an interview with Richard Herring, described his comedy as ‘throwing stuff against the wall to see what sticks’. Neither Mr Law nor Mr Nichol are young people (being both older than 25). I’m not sure what point I’m trying to make with this information, only to add that they do seem to know something, and some things in this show stuck.

The show’s sub-genres are ‘seminar’ and ‘light opera’. There was nominally a theme for the seminar, and definitely music, so at least as accurate as most comedy shows. If you’re familiar with either comedian, you’ll know what sort of anarchy you’re in for, and if not: two grown men dicking around on a stage, not overtly trying to be funny, but throwing stuff out to see what’s a goer and what’s not. It’s quite beguiling. A late-comer was employed as a chair. An audient was ‘cured’ of apparent fascism. Mr Law can fit a microphone in his mouth. Mr Nichol can play accompaniment on the guitar for a variety of musical styles. Peanuts were thrown at the audience.

It’s unlikely you’d choose this show without an inkling of how it’s likely to go down. Hit or miss with the funny, but definitely very good fun.

Ben Target: Six Endings in Search of a Beginning 4.5***