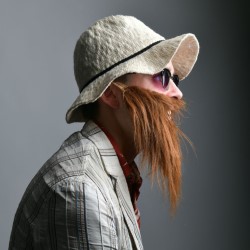 Mr Norris seems to pour his heart and soul into his craft, and so what might have been simply ‘forty minutes of nonsense and a bit of scripted stand-up material’ is transformed into a – admittedly still silly and a bit nonsense – show with warmth and heart.

Joz himself can’t come to the show, fellow comedian Ben Target explains, so has sent along Mr Fruit Salad instead. This is Mr Fruit Salad’s first show, and he’s got a style and a structure he’s aiming for, neither of which he achieves, but the parody is more engaging for that. All the various elements of the show – visual humour using the venue, pushing the audience’s tolerances almost to the limit, becoming more ridiculous with every iteration, in-character meta-commentary on the progress of the show – come together to create a warm, inclusive atmosphere and a sympathetic character.

The show’s absurdism is not simply superficial nonsense; it also has a layer of thoughtful consideration underpinning it, some of which leaks through at various points, and the show’s finale, with Mr Norris returning to the stage, underscores this beautifully. A delightful, funny show (with a great costume change!).