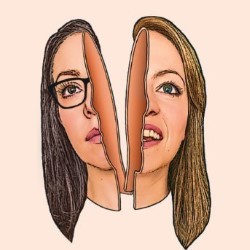 Yes Flo and Joan are actually sisters, but you wouldn’t immediately guess that by looking at them. Neither are they really called Flo and Joan, but that doesn’t matter. What they are is very talented women who know how to produce an hour of very funny and clever musical comedy that had the total sell-out crowd in stiches and wanting way, way more.
Flo is the dead pan keyboard player and singer, Joan the blonde singer and now occasional drummer and keys player, in one song, deliberately start with a low key entrance, swiftly abandoned for a more glitzy one and they are off, into a rip roaring set of their self-penned comedy songs embracing many styles, there is even a folksong mashed up with rap on an occasion or two.
The major difference with this show from the last two years is that there is less stand-up, well I suppose in their case it is more accurately sit-down comedy between the numbers but this does not detract from what is a thoroughly engaging performance.
Tickets are already hard to get and this situation will only get worse. Don’t miss out whatever you do.
****
Reviewed by Geoff
Assembly George Square Gardens Piccolo
18.00 to 19.00
Until 25th

Felix and the Scooterman:- Self-Help Yourself Famous 3***