This is the second time our group has reviewed this show. Two reasons why. The first review took place very early on before the show had really bedded in, and, secondly, it provides a great opportunity to see loads of acts because of the chat show format; thus a different show each evening.

The show I saw went with a real zing. Joe Simmons (Butch from Topping and Butch) and Lorraine Chase compered and chatted with the guests. There is a good chemistry between the two. There was a cracking line up. The chat and the banter were with Tom Allen who has his own chat show ‘Tom Allen’s Afternoon Tea’, and the marvellous Helen Lederer, only appearing for one performance of ‘An Evening with Helen Lederer’ – more’s the pity.

Other guests who most successfully performed extracts from their shows were musical act Opera di Neposti from their show just ended ‘Into the woods’, rock music comedy act ‘Rayguns Look Real Enough: Balls Deep’, sketch show acts ‘Cab Fare for the Common Man’ and the ‘The Dog-Eared Collective: You’re Better Than This’.

There was still enough time for Michael Topping to sing a saucy, cab journey song. Rounding off the proceedings was a busking act ‘The Showhawk Duo’; two guys on guitars whose fingers flew over the strings. They did Queen’s ‘Don’t stop me now’ and received rapturous applause and then played a second instrumental as we exited. These guys should be playing in a venue somewhere.

At the end, Lorraine Chase described the show as ‘Stonking’! I don’t think anybody in the audience would have disagreed. Full praise must go to Terry Finnegan for putting together such a very varied and enjoyable group of performers.

An Evening with Helen Lederer Cab Fare for the Comman Man Edinbuirgh Tonight with Joe Simmons and Lorraine Chase Opera di Nepotist Rayguns Look Real Enough: Balls Deep The Dog-Eared Collective: You're Better Than This Tom Allen's Afternoon Tea
Share on Facebook Tweet This Share on Google Plus Pin This Email This

Paul Sinha: Looking at the Stars 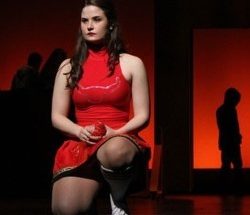