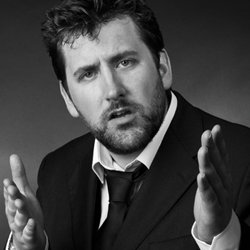 Garrett has been plagued by his inability to answer questions, in particular stupid ones. Some explanation is given as to what a stupid question consists of, and for the rest of the time, Garrett tells stories of the consequences of being unable to answer.

Garrett Millerick is a good story teller. When he has a good story to tell, he does so with some skill, providing exactly the right details to bring a scene alive. He’s also rather good at evoking the characters in those stories, bringing them to life with the same skill as the scenes. Slightly manic in places, and with some material very close to the bone, Garrett nevertheless had a good rapport with the audience, dealing smoothly with the latecomers.

Slightly disparate elements hung together uneasily, although each entertained in and of itself. Most of the audience seemed to enjoy themselves, although some clearly didn’t (they left).

Pretending things are a c*ck