Chris Martin: This Show has a Soundtrack 3*** - One4Review 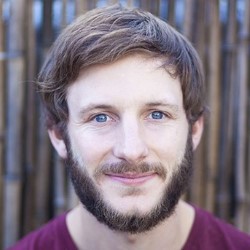 If you are looking for a gag a minute comic then maybe Chris Martin, no not him from Coldplay, is not the guy for you, however if you are in the market for an hour of funny anecdotal humour related by a pleasant comic who is going places then maybe he is.

If films have a soundtrack, then why not stand-up comedy Martin questions and has commissioned an underlying soundtrack for this hour, certainly no one else I have seen this Fringe is doing similar.

Martin doesn’t make much of the music except at the top of the show but action movies, his impending nuptials, their living arrangement, fear of mice, karaoke bingo, revenge on his nemesis from school days and a whole load of observations on his parents 30 year marriage ensure that this accomplished story teller has plenty of material to fill his hour.

Martin is a well presented and affable chap who deserves to succeed at his chosen career and I can’t imagine he will ever be short of work. Whether his soundtrack idea will catch on only time will tell but stranger things have happened.

Caledonian Folk and Blues at The Guildford 21st Year 4****