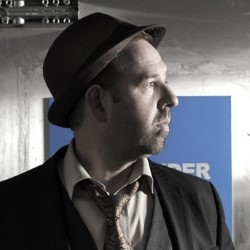 Alfie Moore has been doing stand up for a number of years, this is the fourth Fringe offering I have seen him perform, and has had a Radio 4 series as well. There is always one constant in all these, the police service.

Moore’s ‘other job’, one he is on sabbatical from currently, is a police sergeant based in Scunthorpe, so it is safe to assume that he has a wealth of material and anecdotes to draw on. Moore is, or is that was?, passionate about the way the police force have been decimated by successive governments, about corruption within, the graduate programme and the gradual privatisation of this institution.

Using his oratory skills Alfie argues succinctly the for and against side for a selection of police related topics, before giving his judgement, complete with a legal wig on head. There is plenty of food for thought here. He has well written material, logical arguments and some funny lines along the way. He is a pleasant enough comic to listen too also, but I still occasionally believe his audience interaction could be increased, but it is a nice hour.

Moore has to decide in a short time if he returns to the force or forges ahead as a stand-up. Only he can decide. I feel personally he may have to move more away from police based sets if Alfie the comic is to become a permanent fixture.

The Falcon’s Malteser by Anthony Horowitz 5*****

Chris Martin: This Show has a Soundtrack 3***