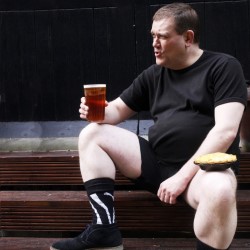 In my opinion Gavin Webster to be has always been a quality comedian. Okay he may not be the biggest name on the comedy circuit and his style doesn’t appeal to some but he is a genuinely funny man and this down to earth Geordie is always value for money.

Larger than life Webster bursts onto his stage with the Northumberland National anthem prior to getting down to what he does best, funny stories and jokes, load of jokes.

In December 2014 Webster won an award for Comedian’s Comedian which surprised but delighted him so he set about trying to gain other awards to boost his ego to various success.

Webster has bags of personality and a raft of well written gags and is a born raconteur. The show leads us through his year in award hunting, often self-deprecating in style and delivers an enthralling hour including a couple of clips recorded at award ceremonies. Oh and there is a sing a long at the end too, so be prepared to unleash your inner pirate!

For an hour of excellent comedy Webster is your man. And who knows how many future awards he may win