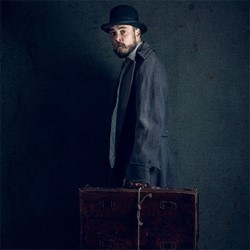 The only criticism I have of the show I saw is that the audience were a little confused and slow to understand what was expected of them. Everything else was brilliant.

The show, as the programme thrust into my lap by a harried man in a fez and a full-length nightgown explains, combines elements from physical theatre and comedy, mime, puppetry, and clown. There’s no story as such, though there are lots of smaller scenes, some with their own internal story, which are linked by sound or prop or action. It’s performed by one bearded man who manages to convey everything necessary without uttering a single comprehensible word, and who also cajoled around half the audience onto the stage at one point or another.

The whole thing is utterly engaging (and often uproariously funny), and ranges from almost slapstick to some really rather dark territory, with some excellent twists and long-fuse jokes. There are two bits of puppetry which deserve special mention: both very different, but both beautiful in their own ways.

This company deserve every five-star review coming their way.