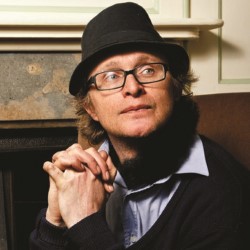 Mr Munnery is entirely at home on stage, even the one in the Stand where the audience are almost sitting on it. The show started with several openings, almost any one of which could have served well on its own.

Performers have to submit their show titles for the Fringe guide in February, long before the show itself is written, so Simon dealt with the things promised in his blurb in a few pithy sentences and a despairing sigh. The rest of the show seems to spring entirely from Mr Munnery’s whimsy: as if he’s got so much material in his head, he just presents whatever takes his fancy, knowing it’ll be good. (Though this can’t be the case; things were linked too well together).

There’s quite a variety of stuff in this show: overt politics, utter nonsense, observational insight, word play and an excellent piece of visual comedy which I would have liked to have seen more than once, simply in order to appreciate it fully. This show is less structured than stand-up usually is, but delivered by an experienced and confident performer so it never lost the audience.