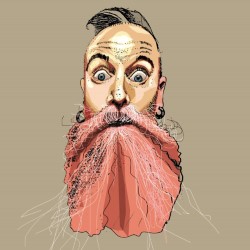 Gallivanting means to go around from one place to another in the pursuit of pleasure or entertainment. And that is a totally suitable word to describe Martin Mor. The Northern Irish comedian is one of the widest travelled comics and everywhere he goes he entertains and brings pleasure to those who see him.

There is something captivating about this guy. His appearance is unmistakeable a big man with a bigger beard, his personality is bigger than both and he tell stories and cracks really funny jokes throughout the hour long set.

Mor is gregarious, never happier than when he is chatting to and involving the audience in his stories of places he’s been and things he’s done whilst there. We visit, in his tales, Dubai, Amsterdam, Chile, Thailand and Australia but with his props, a world map and a plane we could end up anywhere.

This show, like all his performances, leaves you feeling that you are in a safe pair of hands and Martin is like a mate from the off. It is a delightful way to spend an hour, but be aware you will probably be exhausted by all the laughing you will do whilst there.