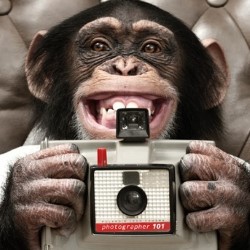 The premise of this show is good: a slide show of Ian’s photos accompanied by his commentary. There’s huge potential for comedy in that, especially given Ian’s previous profession as a photographer and that one of his subject matters is the Fringe. But this was a show that you smiled rather than laughed at, and the loudest reaction was for a (factual) heckle.

He did suggest he was having a day which needed more coffee to get it moving, but I also felt like the show needed an injection of caffeine. Mr Fox’s delivery is clear and intelligible, but lacks variation of tone, pace, or even just volume. This is all fine for nattering to friends, but it seems to me that for being on stage (or even just public speaking) you need to exaggerate a little, else you get lost in the space.

However, there’s a simple-but-effective structure to the show, good use of AV tech, and an ending which definitely gets points for fun and different. Not a stand out show, but amiable enough.