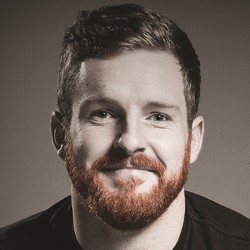 Nick Cody is an extremely funny Australian comedian, he’s a real man’s man who comes onto his set to rap music which he finds can make him a bit aggressive and pumped up so he has to limit his listening time. His material is drawn from life experiences of which he has had many.

He talks of his love of all things manly, such as Australian Rules football where as a teenager he attained the nickname of cru$her. He’s a fan of cage fighting and has also travelled extensively as a comedian, to war torn countries to entertain the troops. He talks of his hero, Mark Donaldson, a recipient of the Australian Victoria Cross for bravery, all fairly unlikely topics for a comedy show, however, Nick is able to relate his encounters into hilarious anecdotes which he does with great ease. His set is not all testosterone fuelled, he also discusses his “loose unit” parents and the stunts they pull, his girlfriend and her ability to introduce him to his feminine side as he now has a penchant for scented candles and cirque du soleil. He works well with his audience and even gets them to participate in a particularly amusing part of the show where he wants to reproduce an audio book and needs some sound effects. Other stories include, an incident with a toilet hose in Thailand, a cycle ride into the wilderness and the benefits (or not) of Bikram yoga.

Nick’s material has real substance to it and I could happily have carried on listening to him for a lot longer and judging by the laughter in the room so could the rest of the audience.