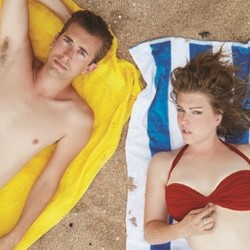 Daffodils – A Play With Songs

This piece of New Zealand theatre is, it tells us, the true tale of a band member’s parents lives together. More ‘a story with songs’ than a ‘play’, the tale is told by two actors; the parents, each telling their story on opposite sides of the stage, moving only backwards and forwards on their narrow strip of carpet, barely acknowledging each other and never interacting. Between them is a three piece band.

The story starts when the couple meet – her drunk in a patch of daffodils, the same patch of daffodils that, it transpires, his parents had met in years before. They fall in love, marry, have family, fall out of love, separate and he dies. The lives (the perspective from which the tale is told become increasingly divergent) are described through a series of events that are usually incorporated into New Zealand ‘classic’ rock songs.

The tale is bittersweet, the inability of two people in love to communicate is tragic and the theme universal enough to garner empathy across the audience. The two actors are charismatic and flexible enough to convey both the emotional depth but also the comedic moments (of which there are plenty). They also both have great voices and the music, although it often doesn’t add anything to the narrativ,e is great to listen to. Less successful is the projected backdrop which shows scenes from the lives – it is invoked intermittently and lacked a clear sense of purpose or style – the show would have been just as good without it.

A love story, told with passion, humour and a rocking soundtrack – what’s not to like?

Audience with a Transvestite August 8, 2005 | admin