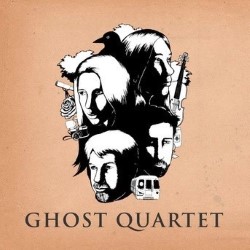 This is not a musical but nor is it a concert. The story is defined in album terms- Side 1, track 1 etc but theform becomes subverted when we reach the end of Side 2 and Side 3 starts. Side 3 also becomes the point when the minimal ‘staging’ is done away with and we spend most of this ‘side’ in complete darkness – an interesting choice but not necessarily a good one.

The musicians are all extremely talented and the music covered a number of forms. Looking at my fellow audience members (something the Roundabout so well facilitates) however there was a sense that people were not generally engaging to any great extent. It did seem at times that the performers were having a lot more fun than the audience. The performance worked best on the two occasions when the audience were given the chance to join in, as percussion instruments were handed around. The second time this happened the band left the stage, the show over, and the audience continued to play for the next 4 or 5 minutes themselves!