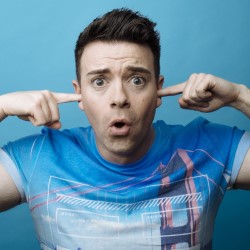 Radio and TV Presenter Des Clarke is back at the Edinburgh Fringe, doing 3 separate sets on the things that matter most to him. From 3rd to 11th he’s talking about Love, which was the show I saw. The 12th to 21st will be about Sandwiches, then 22nd to 28th is about the Apocalypse.
Des is a very personable, extremely funny man who builds rapport with his audience immediately. He talks about life, growing up in the Gorbals area of Glasgow and the reasons for that vinegar smell in the stair.
As the theme of the show was love, Des explains that as a Scottish man it’s not easy to tell someone you love them, unless you’re very drunk and can use expletives to pad out the sentiment. He discusses his relationship with his parents, how he’s come to appreciate them and how his father show’s his pride for him in typically Scottish ways. He share’s many amusing anecdotes of events in his life such as carrying the Olympic torch, hosting the closing ceremony for the Commonwealth games and his unintentional foray into political presenting.
Des finishes the set with a real love story in his own inimitable style.
A very quick hour and a very happy audience. A welcome return to the Fringe and certainly time well spent.