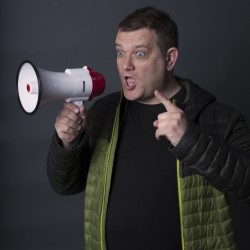 One can be assured that if going to any Gavin Webster show that there will be an hour crammed with Gav’s opinions, told in his rip-roaringly style, but liberally peppered with laughs throughout.
And this is no exception. Webster of course is a Geordie and, according to him anyway, his accent is not sexy, and with his usual aplomb he demonstrates a few others before getting to the meat of the hour.
It is fair to say that things wind him up and quotas for anything is one of his major gripes, but don’t worry there are plenty of others too… he is never lacking in topics during any of his shows and as these are addressed his opinions seem to make a lot of sense with most of his capacity crowd.
Other than his well-written and impeccably delivered moans, Gavin steps back into his own early life school, growing up in 80’s, Dr Who, James Bond feminist and racists further extend the topic menu he expounds on.
This is a really good hour of comedy and if what he said at the top of the show this is his last Fringe well there are not too many more chances to catch him. Don’t be one to miss out.
****
Reviewed by Geoff
Stand 2
19.35 to 20.35
Until 27th