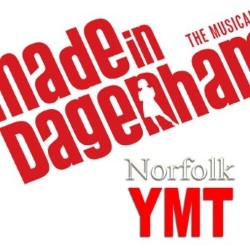 Norfolk Youth Music Theatre return to the Fringe with the fairly recent West End hit, Made in Dagenham. Based on the true events at the Ford Dagenham plant in the 1960s, it tells the struggle of the skilled womens’ fight for equal pay with their male counterparts and features several real characters involved at the time.

It was nice to see a good attempt at the actual historical characters and there were a few very good performances from the principals, especially Ellen Smith as Rita who did an excellent job with her final speech – there were quite a few teary eyes around the audience. However the production suffers from the big problem with a lot of musical theatre at the Fringe, a lack of mics. It’s a big expense to just boost things a little but it’s so necessary.

So we had quite a lot of dialogue spoken upstage and even singing at one point upstage leaving many lines lost and parts of the story unclear. Add to this an apparent lack of understanding of the text and many missed comedy moments, some basics let the production down. As one example the ‘master baker’ device sets up a joke which was completely missed.

The small band worked well enough and other than a few timing issues the ensemble singing was good and strong, particularly from the girls. Many solos were too quiet or overpowered by the band though. Also, some bits of choreography seemed out of place and some cast members were clearly not feeling it.

The set worked well, projections giving a very good backdrop to the piece and including pictures of the actual workers from the time which was interesting, although it irked me slightly that, other than Barbara Castle, the hairstyles didn’t match the actual pictures used. My biggest peeve though were all the piercings – take them out! You are not current teenagers, you’re playing older women in the 60s, it didn’t look right.