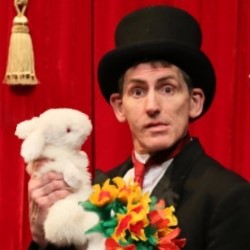 What is a theatre caretaker to do when the star of the show fails to turn up? Take his place of course! This piece of silent physical theatre tells of a janitor who is able to fulfil his dream of becoming a star, albeit unexpectedly.
Jango Starr plays the part of the caretaker and is absolutely fantastic. This show really is clowning at its best. Starr is a very skilled performer. The show has magic, puppetry, juggling, slapstick and amazing use of props. There were many gasps of surprise from the young audience, and the parents also appeared to enjoy it.
As this is physical theatre there is no talking, something that older children may find difficult. There is little audience participation, which is now almost common place in children’s shows. Starr does well to add a storyline to his tricks, but it was lost on my five year old.
With a running time of sixty minutes, and squeezed into the small Assembly Omnitorium, it is perhaps a little too long.
Overall, for young children who enjoy some silliness, One Man Shoe is an excellently performed show and will not disappoint. Jango Starr is a brilliant and skilled entertainer.

Dr Zeiffal, Dr Zeigal and the Hippo That Can Never Be Caught 5***** 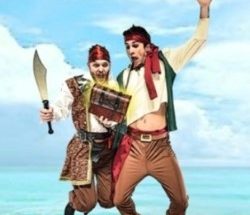