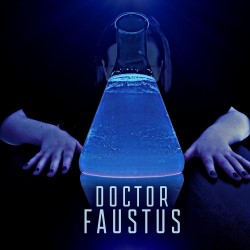 This is a modern setting of Christopher Marlowe’s classic Faust. The main proponents are here, Mephistopheles, Lucifer etc. but set in a contemporary pharmaceutical world where the protagonists are mainly female. This appears to be one of the reasons for developing the show but in truth, I didn’t care either way as it had nothing to do with the plot.

I had two big issues, firstly that the production seemed confused as to what it was meant to be; it was often a serious piece but then dropped into near farce with e.g. a tap dance. It had an overall feeling of being over-complicated, slightly bizarre at points and had gaping plot holes. It was also difficult to put an age on the characters or learn any back story (other than of Faustus).

Secondly, this is sung-through and whilst there is nothing wrong with that as such, there was often no need where straightforward dialogue would have been more pacey (or underscored dialogue if the music needed to continue). The tracked music isn’t very tuneful, is relentless and was incredibly loud for most of the show. On the plus side, Doctor Faustus herself has an excellent, powerful voice with a huge range, is a good actor and very watchable, she carried the show.

Also on the positive side I liked the set, even though it wasn’t really used, and the gadget thingy could have been more gadgety.