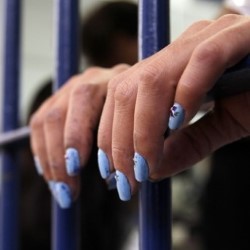 In this atmospheric play by Cassiah Joski-Jethi the audience surrounds a group of female prisoners – Hattie, Rosaline, Sam, Nev and Lily – as they each try to cope with their incarceration. At first we have no understanding as to why they have been imprisoned, but each character has a heartbreaking reason for being there and freedom is at the cost of a terrible compromise. Although we never see a man in the play, their threatening presence is felt by the banging of doors and the tragic stories that the inmates tell. When a new inmate, the more compassionate Ree, joins the prisoners she challenges the uncompromising rule of Hattie which brings a heartbreaking conclusion to the play. The cast are uniformly excellent and being so close to the action makes the pain of each character very real but in such a short running time it is hard to develop each character’s back story fully. This is my second Greenwich Theatre production this year and I’ll be making sure I see whatever they bring to the festival in the future.
Reviewed By Rona
Assembly Roxy
Until August 20th
4.10pm