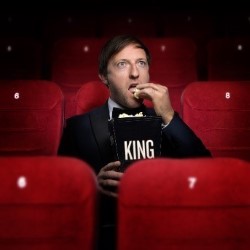 There are many things that are constant in Edinburgh in August, dodgy weather, too many late nights, boozing and that Andrew Maxwell will be plying his own brand of laughter inducing hilarity that is a delight to listen to.
Maxwell is as relaxed in his huge theatre space as I assume he is at home. His easy going style makes one feel it is a chat in the pub with a totally engaging mate, but he has plenty to say and is thoroughly well worth listening to.
Flowing seamlessly from one topic to the next, he covers Brexit and how little is being achieved, the Irish border issues, saunas, Australia, where the news is only about sport, and how not a lot ever happens in New Zealand citing examples to reinforce his views, prior to a routine about working on a BBC series on conspiracy theories, such a source of inspiration for his fertile comedy brain. He also talks about issues with social media and the internet generation, and how Google saved his crew in a madcap American venture.
Maxwell, as always, seems to be enjoying himself as all of his audience were, and believe me they were doing so in spades as always because Maxwell is a definitely a class act.
*****
Reviewed by Geoff
Assembly George Square Theatre
21.00 to 22.00
Until 26th