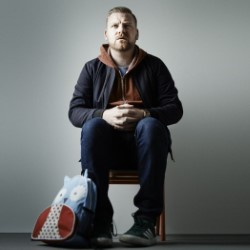 David Horan and Iseult Golden’s play is an entertaining study of preconceptions and how wrong and destructive they can be. The play is set in a classroom where school teacher Mr McCafferty has requested a meeting with Donna and Brian, parents of Jayden, to discuss his learning ‘difference’. At first Brian and Donna, uncomfortable being back in the school which holds no happy memories for them, are subservient to the teacher despite Mr McCafferty’s attempts at putting them at their ease. However, their own relationship issues, combined with the teacher’s own problems, shift the power struggles in the classroom and suddenly Jayden’s difference becomes delinquency.
During the play there are shifts in time as Donna and Brian transform into Jayden and Kayleigh, attending an afterschool homework class. These inserts take place after the parent/teacher meeting and give us an insight into the home lives of the children and Mr McCafferty’s inability to help them make any real change in their lives. When Donna and Brian reappear, the assumptions of class fuel Brian’s rage against the teacher’s attitude and Donna transforms from a shrinking violet, raising her hand to ask the teacher a question, to being stronger than both men.
The play brings much laughter and tears to the audience and you find yourself warming to the initially brusque Brian as he struggles to keep his family together, and admiring Donna’s transformation. All 3 actors are completely believable in the roles, and Stephen Jones and Sarah Morris play Jayden and Kayleigh with great dexterity as they squirm at their desks. The ending is unsuspected, but adeptly illustrates the transformation of Donna and Mr McCafferty. Highly recommended.
Reviewed By Rona
Traverse Theatre
Times Vary
Until 26th August (not 20th)