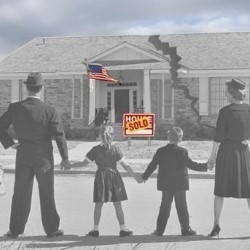 Brian Parks has written a very funny play with 70 minutes of razor sharp comedy that had the audience laughing from start to finish. Two American couples meet to celebrate the sale of a house. The Redmonds LOVE their house but have decided to downsize. The Fishers are an aspirational couple, who the Redmonds have selected as being the ‘right sort’ and worthy of being the new owners of their beloved home. At first, we have a love-in with each couple falling over themselves to please the other couple but even at this stage inappropriate comments give rise to embarrassed silences and much, much laughter.  When the Fishers indicate that some house ‘improvement’ is planned, the crumbling façade of friendship shatters completely. Crackling dialogue is accompanied by hilarious slapstick as this get together disintegrates into an outright war.

All 4 actors give fantastic performances and the humour is often horrifying but you cannot help laughing. If the American dream is to own a house in this leafy suburb, then I fear for their sanity!