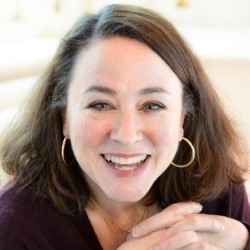 The title of this show gives you a clear idea of what to expect – a comic analysis of Weir’s relationship with her mother, who was not a naturally maternal woman, and how this influenced her self-esteem, which in turn led to her best-known catchphrase.

Her posh Scottish mother did exactly what Philip Larkin tells us your mum and dad do, as, Weir concedes, her grandparents did to mum in their turn. She is trying not to do the same to her own children. Despite all the inter-generational baggage-creation, there is still clearly a lot of love there, and the tales are honestly, but fondly told, albeit with a degree of cringing alongside.

Despite this being her first Edinburgh solo show, Weir handles the incredibly tricky balance between the desperately sad tales and the laugh out loud moments. She manages to make some very ‘Me Too’ anecdotes from her life sit comfortably alongside bursting into song, making funeral speeches, and dancing like your kids are watching.

She wasn’t fully confidently into her stride on her second night, with a moment of losing her thread, and some notes checking, but that aside, it was a laugh out loud emotional rollercoaster well worth watching.