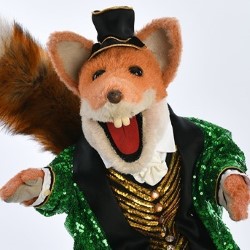 I remember Basil Brush from my childhood with Mr Derek and Mr Roy and the cheeky fox hasn’t changed a bit although he has a new side kick, Mr Martin, played by Martin Cable Reid who was a Britain’s Got Talent Finalist as Kevin Cruise.
The show is loosely based on the Greatest showman with Basil, naturally, playing the Hugh Jackman character and Mr Martin being the lady with the beard. Basil warms up the audience with his familiar witty repartee and soon has the kids all shouting Boom Boom Basil and singing along to his revamped songs. The show has jokes, magic, music and the little one’s love shouting and being part of it. Some lucky ones even get to go up on stage and take part in a custard pie, pass the parcel game with Mr Martin.
Of course, it wouldn’t be a fringe kid’s show without some toilet humour and farting noises, so poor Mr Martin as the stooge, is set up by Basil, who cunningly laces his drink with laxatives which has the desired effect with the children chuckling at his discomfort.
I thought the show ended abruptly but it is billed as only 45 minutes, however Basil then allowed everyone up for a photo op with him which is worth the extra star in itself. My little ones will not accept that he’s not real, such is the authenticity of this timeless character.
****
Reviewed by Sharon
Underbelly Bristo square – Cowbarn
13.00 (45 mins)
Until 15th
There’s also a show for adults only, Basil Brush Unleashed.

Felix and the Scooterman:- Self-Help Yourself Famous 3*** 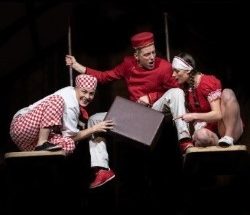