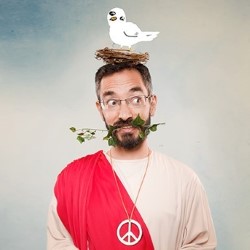 Myq Kaplan is obviously a very accomplished, if somewhat niche comedian, originally from New Jersey, although resides in New York City currently and his humour draws a little on his Jewish upbringing. But not all by any means.

Kapan is not going to appeal to all that is for sure. The show I attended seem to be polarised that some absolutely loved his style, his material his delivery, others looked far from impressed .

Starting off with bathroom humour he ranges wildly through his veganism, how we should all try to channel the non-murder within us. Good advice I think we’d all agree.

He does have the tendency to start stories, get side-tracked, start another, again interrupting his own thought pattern with other musings, but getting back to his stories in full time.

He expounds on his experiences using the powerful, shaman-administered hallucinogenic, ayahuasca which is a consciousness-expanding drug. Maybe this is partly responsible for his opinion that the whole world hates Jehovah’s Witnesses and rock band Nickelback and other occasionally different ponts of view.

One cannot take anything away however, that he is a well prepared, totally professional comedian who has plenty to say and delivers a quality show… that is as already mentioned niche. 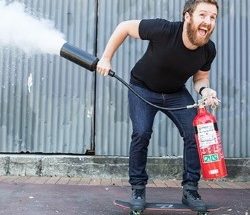