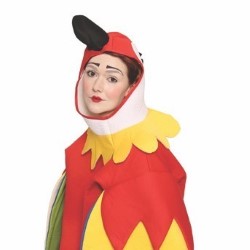 In the previous times I have seen Elf Lyons basically she has been doing stand-up so not having read the blurb of the show I certainly got a surprise. But not an unpleasant one it turned out.
Ms Lyons appeared on stage in a parrots outfit and in a mixture of Franglaise, pigeon English and sometimes a mixture of goodness knows what performs Swan Lake, maybe not as imagined by Tchaikovsky, but interpreted by her in the fertile imagination she possesses.
Although playing all the characters with props such as suitcases crocodile heads, bubbles and party poppers she ‘explains’ the ballet positions, the original plot only a little less strange than her own, relying heavily on her own clowning abilities and theatre of the absurd.
If there was a slight fault it was that occasionally broke character with asides that although were perhaps pertinent to her life if anything slightly distracted from ‘the plot’.
It has to be said that perhaps she is not for everyone but if you are willing to get on board then it is an extremely funny and different hour. As a caveat to the show ‘even if you don’t find me funny, we can all agree that I’d make a great imaginary friend’. I did, and she would.
****
Reviewed by Geoff
Underbelly Clover
21.30 to 22.30
Until 28th (not 15th)

The Little Prince and the Pilot 2**