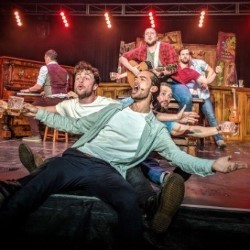 The General Assembly Hall on the Mound becomes the Jungle Bar for the evening, a bastion of the fast disappearing old-time local, where customers sing and dance with great gusto and the audience is treated to a free beer on arrival and encouraged to join in with the singing and dancing. The Choir of Man are nine performers, each having his own back story and introduced to us in an outlining narrative, but the focus of the show is really about the music. The assembled choir are immensely talented and entertaining throughout. Amongst the songs, old and new, are the ever popular 500 Miles, Escape – The Pina Colada Song, You’re the Voice and The Impossible Dream. There is great audience interaction, with audience members invited onto the stage by one of the singers either to serenade or to have a bit of a laugh with, some impressive tap dancing and a hilarious and harmonic trip to the urinals. The audience comprised a wide variety of ages and everyone was raving about the show as they left the venue. This is a real feel-good hour of pure entertainment, leaving you with a smile on your face and a song in your heart. If you only see one show at this year’s fringe, Choir of Man should be the one.
Reviewed By Howard
Assembly Hall
7.30
Until 25th August