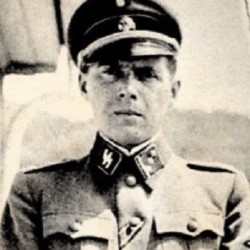 I spent a gripping hour watching this play written and directed by Philip Wharam and Tim Marriot. Based on Philip Wharam’s novel ‘Right To Live’ and with advice and support from the Holocaust Educational Trust, Mengele is a portrait of one of last century’s most notorious war criminals.
The action opens with a film of a beach segueing into a train disgorging hundreds of Jewish prisoners. When the lights come up, we are transported back to the beach but this time there is a man who has been rescued from drowning and a beautiful girl who has saved him. The man is Dr Josef Mengele, and after some flirtatious chat as the girl gently strokes his ego and loosens his tongue, Mengele’s true nature and beliefs come to the fore. Always in control, the girl gently probes Mengele about his history, and he is more than happy to discuss his work and experiments on Jewish prisoners. His utter confidence that he is justified in purifying the human race for the greater good and the fact that his arguments are well thought out is chilling in the extreme.
There are three acts to the play and, before each act, documentary clips of the concentration camps and the prisoners – reminding us all of the horrors of the genocide this man was involved in.
Tim Marriot as Mengele and Stefani Rossi as Azra his ‘rescuer’ are both excellent. The play deserves a wider audience given the current political climate and Tim ends the performance with a dedication to Eva Mozes Kor, a holocaust survivor. It’s important never to forget what humanity can do in the pursuit of power and this play is a timely reminder of that. Highly recommended.
Reviewed by Rona
Assembly George Sq – Blue Room