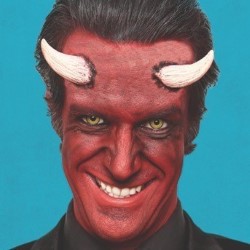 Although I had read that the multi award-winning comedian was returning to the Fringe for an hour of stand-up in the person of Lucifer himself, I hadn’t actually expected Marcus Brigstocke to appear as he was depicted on his poster, complete with horns and copious amounts of red paint. I had, of course, expected an hour of hilarious and topical stand up, which we certainly got, but it was all the more impressive presented from the point of view of Lucifer and with the devil theme running throughout. Brigstocke cleverly weaves the key issues of the day into his theme, even the obvious ones of Boris, Trump and Brexit – we have lowered the entry requirements to eternal damnation so much in recent years that we need to “take back control” of the borders of hell! The venue is large, but that doesn’t stop Brigstocke from engaging fully with the audience and this interaction works well, with the audience’s comments and asides weaved effortlessly and intelligently into the theme. One of the best bits is when the audience is asked to shout out a number of names and Lucifer explains his rationale for why they have actually qualified for hell, however unlikely the candidate might seem for eternal damnation. I would thoroughly recommend this show which, sadly, finishes its all too short run on Saturday 10th.