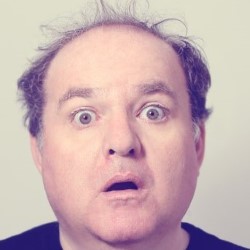 Apparently there are three jokes in this set which kick off the show. The punchlines are easily missed, however true to his constant refrain ‘it’s not important, it doesn’t matter’, it really doesn’t. The process of getting to the punchline that is the comedy and it’s pant wettingly funny. This is the first time I’ve seen Ed Aczel, though I was vaguely aware of his trademark blustering anti-comedy, it’s something you really need to experience first hand. Post the ‘jokes’ section he has a printed list of subjects to generally question the audience about, which I think is the strongest bit of the show. I’m afraid audience interaction is non-negotiable here, even the guy who turned up late, protested illness and then fell asleep didn’t evade questioning. There is nothing malicious in it, you’re not the butt of the joke. Ed Acxel manages to make chat about the best decorators filler and speakers combo’s the funniest thing you’ve ever experienced. It feels as though there’s a real camaraderie built amongst everyone in the room. It’s probably not everyone’s cup of tea, but I absolutely loved it and I think Ed Aczel is my new favourite comedian.