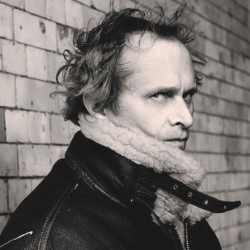 Extinction Rebellion and the climate crisis have given Alan Parker, the bedsit anarchist a new lease of life. His signature sheepskin jacket now sports a graph of carbon emissions levels and is twinned with a gillet jaune underneath. Lefty bougie tropes are given a good poke with football chants supporting supermarkets and a cringe worthy cocktail of chickpea water and strongbow. There is plenty of anarchist spirit left in this warrior, which is thrown at hecklers, technology, typing, cars and most of the modern world. His earnest punk performance to the lullaby-esque strumming by a recruited band in the front row is great. The show is punctuated with gag filled placards giving Parker’s ‘radical problems: radical solutions’. There is an absolutely priceless dance track about
the sky in Watford. This so called ‘dance break’ in the middle of the show keeps the momentum riding high through to the end of the hour. Simon Munnery is a brilliant performer and the energy doesn’t drop for a second. The world has gone a bit bonkers in the
past few years and Alan Parker’s response is a witty antidote to Brexit boredom.