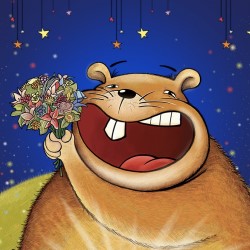 Joyce is the whimsical tale of a father who must be reminded that there is more to life than work. We are taken on a somewhat ‘Alice in Wonderland’ meets ‘The Wizard of Oz’ type adventure, although that sounds good in writing, something about the show lacked wonder. The actors brought great energy to the piece and Bo-Bo and the Clown/Dynamite were clearly working hard to keep the children entertained. However there are lines that seemed shoe-horned in “Find my courage” a clear nod to the cowardly lion.
I’m not sure why the show isn’t called Bo-bo and Daddy’s adventure as Joyce is small character (pun intended).

There were some minor technical issues but the main drawback was the show being sold as appropriate for 0+. It isn’t. Actors are loud and burst onto the stage with a fury at times which two parents found alarming and left with their babes in arms. 2-3+ would be a better way to get the right audience as one parent I spoke to after pointed out “I’m not sure who that’s aimed at”.

Overall you have a show that moves somewhat smoothly through the hour and although certain moments could do with fine-tuning, small children will have a fun time and the actors do their best working with some staging and dialogue issues. The stage magic brings a nice finale without giving too much away. Overall those aged 3-8ish will love the characters although they may have no idea what’s actually going on.
***
Reviewed by Matthew
Assembly Roxy
11.15-12.15
Until 26th

Alan Shed’s Music, Comedy and Everything Else Interactive Quiz Show 4****