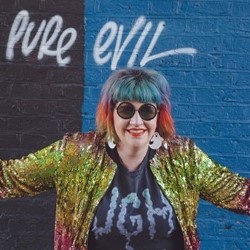 Ms Ewing-Burgess is a tall, statuesque figure, and her head nearly brushes the ceiling above the stage with the addition of fabulous spangly platform boots. The stage is quite small and full of paraphernalia; alongside the boots it doesn’t aid Ms Ewing-Burgesse in moving around the stage easily.

There is a style of comedy which sort of stems from the notion that it is therapeutic and often cathartic to talk about things; skilled comedians use this form and from it bring forth humour, pathos and, if they’re very good, comedy. This works best if the comedian has already worked through some things and has mined the best bits for the show, rather than is still actively on stage sorting things out, which is a little bit how this show felt.

The show’s a mish-mash of different things – about Ms Ewing-Burgesse’s insecurities, the line between them and narcissism, about conspiracy theories (including her favourite one about The Beatles, and a book she found), and about how the world is all about her. The best bit were the lateral thinking puzzles, which, even when you’d understood the technique were still bloody difficult and came with some interesting commentary.

Ms Ewing-Burgesse doesn’t present as a fluent or fluid performer, though a couple of times she hit her stride and there were glimpse of what could be. The content of her material is very personal, but to the point where it felt like listening to your friend who only talks about themselves, rather than a comedian.