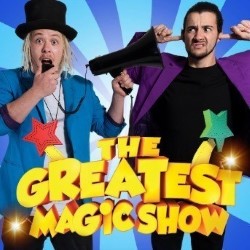 The Greatest Magic Show, all the way from Australia, is fabulous children’s entertainment. Even whilst waiting in the queue the children are included with every one of them being given their own magic wand, a genius idea to keep them occupied and stop the “how much longer do we have to wait” cries.

It is completely children centred and the little ones can sit on large cushions in front of the stage, another lovely touch, so they can all see the performance and feel it’s their show. The Ringmaster appears first, telling us he travelled the world in search of the greatest magic show but couldn’t find it so decided to develop his own. Sam and Justin, the magicians, then bound on to the stage and the magic begins. They select volunteers to assist with each of their tricks and on the day, we attended each of the children were absolute stars and really added to the entertainment factor of the performance.

The tricks included, finding coins on children, a mishap with shoes, balloons, pants in the magic bag requiring a bigger and bigger wand to make the magic happen, this also needed the help of the children shouting the magic words “the greatest magic show” and waving their wands. There was a handkerchief trick with the assistant’s facial expressions making it even more hilarious. We had the banana/bandana trick and precarious juggling. It was full on family entertainment from start to finish. There’s also a poignant speech at the end, encouraging all the children to follow their dreams and never give up.

Sam and Justin come across as genuinely lovely guys who have a real passion for what they do. I would highly recommend this show to anyone looking to keep their children enthralled and laughing in this fun hour. You can also get your picture taken with the guys after the show.