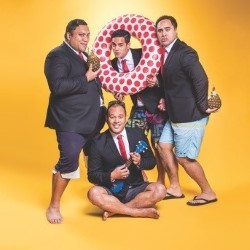 These four guys make you feel very welcome at their garage party. Apparently, in Aotearoa New Zealand, it is very common to hold parties in your garage where friends and family gather to drink, eat, play music and participate in a few songs and story telling. They bring this ambiance to their show where there is plenty of cheeky banter with each other and the audience throughout their performance.
With two guys on guitar and one on box drum and singing in wonderful harmony together they provide a laid back performance of the music. They mix it up well, giving a reggae flavour to Rod Stewart’s I Don’t Want to Talk About It, cover some Rock n’ Roll, pop music from the 70s and 80s and not forgetting their brilliant performance of Maori songs, sung in traditional style and language.
They invite the audience to suggest some songs for them to play (although with two acoustic guitars and a box drum, I think they regretted this when Crazy In Love by Beyonce was suggested). Bringing some Karaoke to the mix they asked if anyone wanted to join them on stage (by coincidence, or not, one of the guys from the musical Jekyll and Hyde got up on stage and did a couple of numbers with them).
They make great hosts at this party providing music and laughter throughout. With a few drinks on ice, I could have quite happily stayed and listened to these guys all night.