Geoff and I first saw Russell Howard compere the press launch in the Pleasance Grand in 2004 where he picked out a female audience member and proceeded to loose to her at arm wrestling. This cute little boy (that’s what I thought at the time) is talented and looked fun, which is why I went to see his full Fringe shows ’05, ’06 and 07. I thought I’d let someone else have the pleasure this year but due to circumstances beyond her control I got a last minute text to see Russell. Armed with a Jaffacake muffin, see reviews 2006 and 2007, I joined the sell out-crowd making my way to the Assembly Music Room, managed to get a seat in the front row. His self announced “ladies and gentlemen welcome on stage me” was greeted by applause and cheering. This gentle entry on stage belied what was about to happen, it was almost ‘light the blue touch paper, step back out of danger then “Bang” an explosion of comic genius’, as an hour’s worth of comedic rockets, starbursts, sparklers, Catherine wheels and bangers kept us enthralled. Russell may confess to having A.D.D. but this only aids to his attraction. As with many of the comedians I particularly like he is prone to jumping from story to story for seemingly un-connected reasons but always manages to come back and complete his stories. It is almost as if he is a twin, but that twin is still inside him stuck at about 7 or 8 years old. This twin’s voice tells him to do things most grownups would not do. It also makes him giggle at often-inappropriate times and makes him scared of lots of innocent unintimidating things. I wondered if his increasing TV exposure might change him or if the huge space might drown him, but no, he is as down to earth, cute, talented and hilarious as ever. His giggles and belly laughs are so infectious his essence should be bottled up and given out free on the NHS to cheer people up, but he’d probably find that scary too. ***** 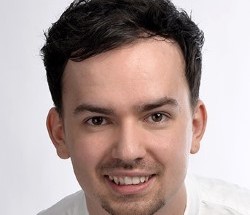