Rubies in the Attic - One4Review 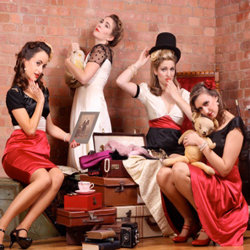 Attired in individually designed costumes splashed with ruby red, the four Ruby Dolls ooze class and style. Their performance is a triumph of musical theatre versatility. I sensed watching them that much love had gone into crafting this show and how the audience responded!

The show is structured around the Dolls ancestors who came from very different backgrounds and this was reflected in their narration and musical choice. Each Doll in turn took centre stage as a solo performer. The choice of music is so wide ranging – Noel Coward, African folk, Italian opera and Edith Piaf. This is only a sample of what they perform and with an easy and natural humour. Their close harmonies are just sublime. You know a show is a totally enjoyable when the hour glides by so quickly.

This might be the Ruby Dolls first Fringe appearance but, take my word for it, from the evidence of the audience’s reaction, this is a show which will build up a momentum by word of mouth alone and deservedly so.

Rob Deering – The One